Built-in 1644-47 AD, this mosque was built by Mughal Emperor Shah Jahan.
The total area of this mosque, which was completed in three years, is 6346 square yards.
A total of 900,000 rupees was spent on the construction of the mosque.
Its base is twelve to fifteen feet deep, and is composed of mountain rocks.
This mosque with five small and big gates has six big and 94 small domes and 94 pillars.
The most unique thing and quality of this mosque are that the arrangement
of its domes has been arranged in such a way that the voice of Imam Sahib
can easily be heard throughout the mosque without any checker. For this,
airflow has been arranged in such a way that throughout the mosque
There is no feeling of lack of air anywhere, nor is there any kind of tightness.
There is a capacity for about 20,000 worshipers to pray at a time.
It is said that one night Shah Jahan had a dream in which Allah commanded him to build a mosque
in that area and Shah Jahan built such a magnificent mosque in a very short time.
When Sher Shah fled to Iran after being defeated by Suri, he stayed there so that
the construction of the mosque could be completed.
Shahjahan got it done under the supervision of renowned architect Mir Abdullah.
Blue glazed tiles were procured from Hala and mixed with red bricks.
A wonderful example of crafty tile work, this mosque is a wonderful
example of Muslim architecture and cultural heritage. Since 1993,
this mosque has been provisionally included in the UNESCO World Heritage List.
Apart from the Shahjahan Mosque, D Bagir Mosque is also worth seeing nearby

20 best places to visit in Punjab 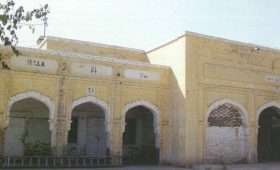