This grand building was built by Shivratan Chandartan Mohatta, a Hindu businessman from Marwar,
for his residence in 1927. For this, he hired the famous Muslim architect Anna Ahmad Hussain.
For the beauty of this building, according to Rajasthani tradition, the pink stone of Jodhpur,
India was used locally. Used with obtained yellow stone.

This building is spread over an area of ​​18500 square feet.
After the completion of this building, Mohata could live in it only for a year.
After the partition of India, he decided to go to India. After his departure,
the government of Pakistan took over this palace It was taken over
and used as the Ministry of Foreign Affairs. In 1964, it was given to the
custody of the nation’s mother, Ms. Fatima Jinnah, and it was named Qasr Fatima.
After the death of the motherland, Jinnah moved here to Sher.
After Jinnah’s death in Sher in 1980, this building was sealed.
In 1995, the Sindh government decided to purchase the Mohatta Palace
and turn it into a museum to promote and develop art. After its completion in 1999, it was opened to the public regularly.
It is located at 70 Hatim Alvi Road near Clifton Bus Stop 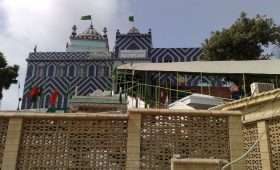 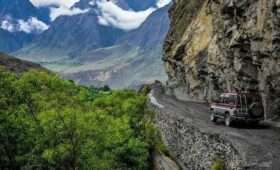